About Eula Mae and John Baugh 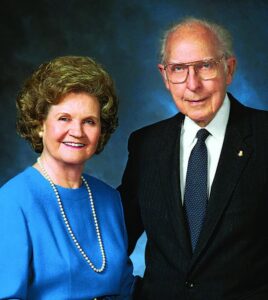 No couple was more devoted to one another, to their church, to the Baptist denomination and to a company than Eula Mae and John Baugh.

Eula Mae was the daughter of a Baptist minister, a dedicated Bible student and a gifted Sunday School teacher. She was John’s lifelong partner not only in faith and family but also in every business endeavor. Zero Foods Company was set up as their proprietorship in 1946. It was owned by John and Eula Mae Baugh and designed to supply frozen foods in institutional-size containers to hotels, hospitals, school districts, restaurants, fast-food stores and large grocery chains like the A&P. When the SYSCO Corporation was formed in 1970, she was by her husband’s side as companion and confidant. They were Christ-like Baptist leaders in church and society, together, all their adult lives.

John Baugh, “the Sysco kid,” was a rare combination of integrity, ability and determination. From humble beginnings he achieved success in business, respect from peers and devotion from employees. He was known and loved as a person of impeccable Christian character and kindness. A member of Second Baptist Church, Houston, for 50 years and Tallowood Baptist Church, Houston, for 12 years, John was a gracious benefactor to Baptist institutions and causes, as well as a host of educational and humanitarian organizations.

Of all the tributes paid to him during and after his life, none is more poignant than the “Resolution and Tribute ” offered in 1998 by the SYSCO board of directors as he approached retirement. The following is a portion of that tribute:

WHEREAS, John F. Baugh, over 30 years ago, conceived the benefits of a national distribution enterprise serving the foodservice industry of our country, almost single handedly searched for and selected individual operations that could and would appropriately be combined into this new enterprise, created the name of SYSCO for this organization and adroitly negotiated the difficult and sometimes conflicting desires and requirements of investment bankers, public accountants and individual entrepreneurs to accomplish simultaneously a successful merger of nine heretofore totally independent operations and an auspicious common stock offering of this new company; and

WHEREAS, from March 10, 1970, even through today, John F. Baugh has selflessly devoted his time and energy to the nurturing of this company, first as chairman and chief executive officer, then as chairman and lately as senior chairman – during which period the annual sales increased from a level of $115 million to a current level of over $15 billion – to the 92nd largest United States publicly-owned corporation – and the value of a share of common stock has increased one hundred fold; and

WHEREAS, through all this period, John F. Baugh demonstrated not only consummate business vision and leadership, but combined these attributes with a personal kindness, a special consideration for others, an ineffable politeness that reflects a genuine love of his fellow men and women and caused these to excel at times beyond their own expectations; and

Whereas, throughout all his years of leadership in the SYSCO enterprise, John F. Baugh demonstrated unstinting devotion to the principles of loyalty, integrity and harmony with his God.

NOW, THEREFORE BE IT RESOLVED, on behalf of the more than 32,000 employees of SYSCO and its 17,500 shareholders, we the Directors of the Sysco Corporation, express our deep gratitude for the nearly 29 years of John Baugh’s executive leadership, the legacy of his enduring accomplishments and an appreciation for those lives he has touched and made better by their association with him. We hereby convey to Mr. Baugh our deep respect and ongoing best wishes and look forward to our continued future association with him as a SYSCO Distinguished Tenure Director. (November 1998)

John Baugh’s life and legacy are impossible to measure, but those who knew him will remember him with the Scripture, “There was a man sent from God whose name was John.”